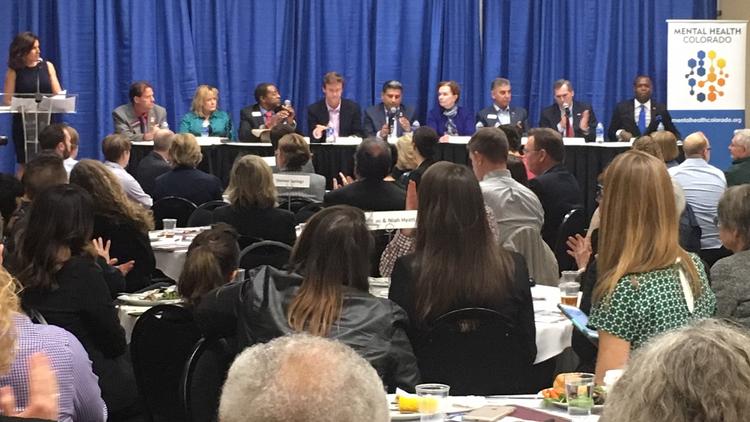 Put six Republicans and three Democrats on the same stage, and you might not expect them to agree on anything. When it comes to improving mental health care, however, you can find common ground.

Nine candidates shared a stage this spring at Mental Health Colorado’s first-ever gubernatorial forum. The consensus, we ought to make it harder for people who pose a danger to themselves or others to get guns, and easier for them to get treatment.

Those are two of the priorities we asked the state legislature to address. The first involves an extreme risk protection order; it would allow law enforcement officers to remove weapons temporarily from the homes of individuals at risk of suicide or violence.

To be clear, most people with mental illness are not violent; they are far more likely to be victims of crime than perpetrators. But for those at risk of suicide, a gun represents the most lethal means.

Nine states have already enacted “red flag” laws, and the approach seems to be working. Connecticut, for example, prevented one suicide for every 10 guns removed.

Unfortunately, Colorado lost the chance to join that list. A bipartisan bill passed the state House but failed in the state Senate. Mental Health Colorado will continue to work with members of both parties to bring this legislation back.

Each year, an estimated 35,000 Coloradans experience a mental health crisis that makes them gravely disabled or places them in imminent danger. That’s a conservative figure, based on the number of people who are subjected to involuntary holds.

Under current law, those holds can last for up to 72 hours. Once that time is up, roughly 10 percent of these individuals are certified for involuntary treatment.

But most don’t meet that standard, and many never get treatment. For some, the cycle of crisis simply repeats itself.

That’s why we asked the legislature to step in. Instead of waiting for more Coloradans to fall through the cracks, we ought to help them get care.

We wrote Senate Bill 18-270, which passed both chambers with bipartisan support. Under this proposal, a team of transition specialists will provide assistance in housing, residential placement and treatment. It’s modeled after a state plan that supplies such assistance to some individuals who leave Colorado’s mental health institutes.

The vast majority of Coloradans, even those with severe mental illness, are not institutionalized — and don’t need to be. Colorado’s own experience, as well as that of other states, shows that proper treatment and support improve outcomes and lower the demand on hospitals, emergency rooms and the criminal justice system.

Turning our jails and prisons into warehouses for people with mental health or substance use disorders is the most expensive and least therapeutic decision we can make. The bottom line: it’s far cheaper, more effective and more humane to treat mental illness than to ignore it or to criminalize it.

That’s a conclusion with which every candidate — and, we hope, a majority of our elected officials — can agree.

Andrew Romanoff is the president and CEO of Mental Health Colorado, the state’s leading advocate for the prevention and treatment of mental health and substance use disorders. He served as the speaker of the Colorado House of Representatives.