On a chilly Friday night in Windsor, Colorado, the conservative, gun-loving rocker Ted Nugent entertained a crowd, talking about the Constitution, politics and freedom during a fundraising event for Weld County Sheriff Steve Reams.

“Well, well, well. What have we here? This must be real Colorado!” Nugent said to the crowd. “When I started coming here rockin’ and rollin’ in 1967… Boy, I was in Colorado, man! Ranching, rugged, individual-tough-s***-kicker Colorado! Now it’s like drooling hippie Boulder! What happened there?”

On promotional materials, the event was billed as an “American Celebration,” with a handful of sheriffs who are pushing back against the law, “fighting the stranglehold on our Constitution.”

It was primarily an event to drum up support for Reams because of his position on the Deputy Zackari Parrish III Violence Prevention Act, the state’s new law that creates Extreme Risk Protection Orders (ERPO). The legislation is also commonly referred to as a red flag law.

The controversial law, set to take effect in January 2020, allows family members or law enforcement to ask for an ERPO, a court order requiring someone to temporarily give up their guns if they appear to be a “significant risk” to themselves or others. The law enforcement agency serving the ERPO is required to take custody of the firearms and then ask if the respondent prefers law enforcement or a federally licensed firearms dealer store their firearms for safe-keeping. 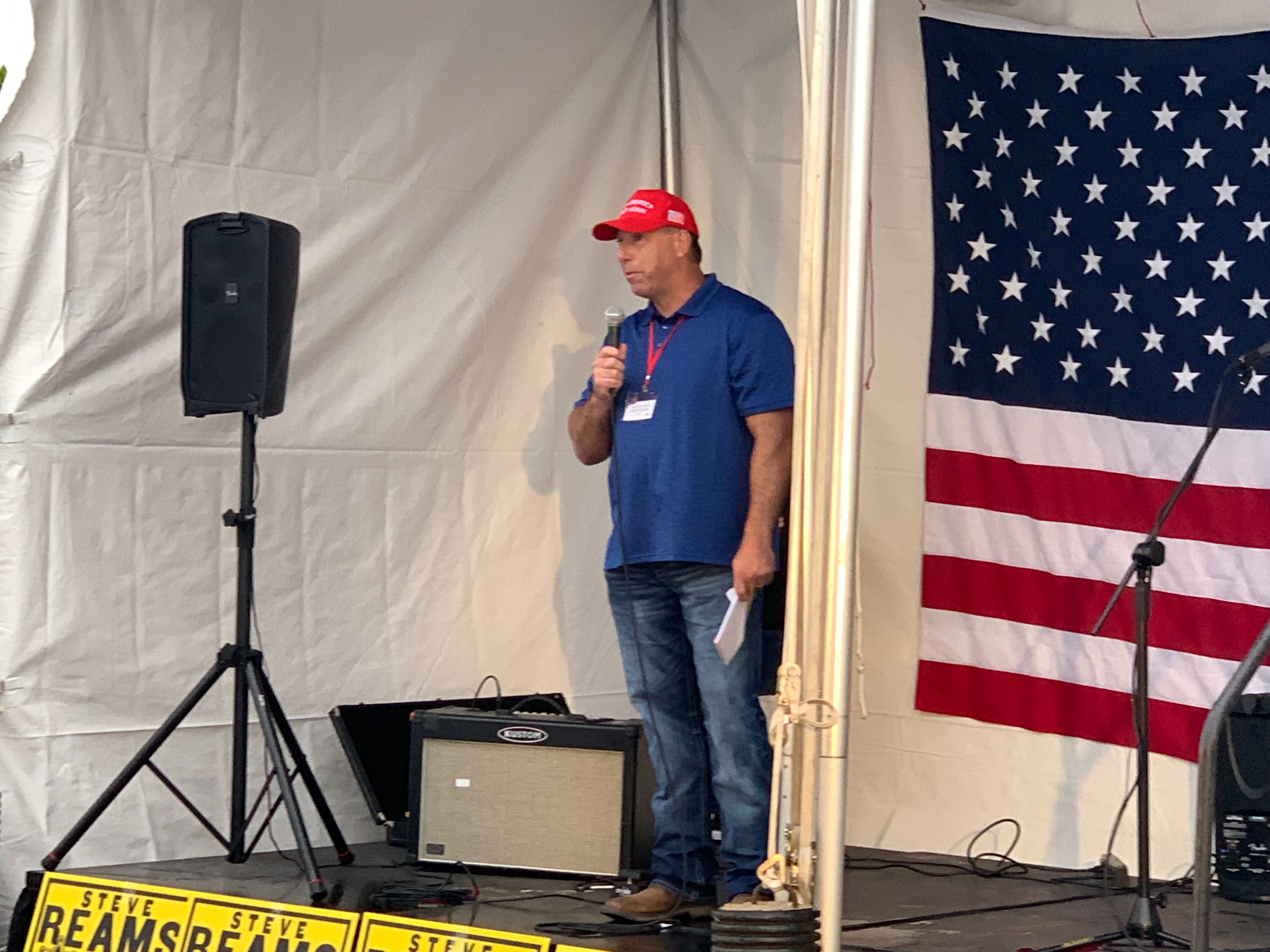 Reams believes the law is unconstitutional and has said as much during interviews with national outlets like Fox News. In March, he told CNN that he would rather go to jail than enforce this law.

“We’re up here talking about the red flag bill,” Reams said on stage. “That’s why we’re getting all this notoriety in the state. That’s what everybody appreciates that we’re pushing back for.”

With his outspoken opposition to Colorado’s ERPO law, Reams joined a larger movement of sheriffs opposing new gun laws in states like New Mexico and Oregon. Meanwhile, counties in communities across the country, including dozens in Colorado, passed so-called “Second Amendment Sanctuary County” resolutions, in support of gun rights. In some cases, these resolutions restrict spending county funds on complying with the ERPO law.

These vows have introduced the prospect of uneven access to gun laws depending on where residents call home.

The law requires that the state develop policies and procedures for executing ERPOs by Dec. 1, 2019. Despite uncertainty around those details, Reams has made up his mind about what he won’t do.

“Essentially what I’m saying is, I won’t be an applicant for a red flag order,” Reams explained. ”If we have someone who is a significant risk to themselves or others, we’ll go out and handle that person … but taking their guns away is not how to make a situation better when a person is in crisis.”

What happens, then, if a family member of someone who lives in his area gets one of these orders from a judge and the individual won’t voluntarily surrender his or her firearms? Would the sheriff take custody of those guns?

For now, this is strong rhetoric that has not been tested yet. For his part, Reams is talking about this issue, at least in part, because it is political; he is an elected official, unlike police chiefs who are appointed.

Weld County is home to multiple law enforcement bodies: the sheriff’s department and various police departments. Mark Jones, chief of police in the county’s largest city, Greeley, says he plans to enforce the ERPO law within his jurisdiction.

“Obviously, it’s my role as the police chief to make sure the department enforces the laws on the books,” said Jones. “With that said, I think it would be easier to say that we will certainly take it case-by-case. I mean, if we have court orders from judges that are telling us to do things, it’s going to be pretty difficult to not do them.”

When we spoke, Jones was cautious in discussing the ERPO law, as he was in an op-ed he wrote in April. He chose his words carefully, emphasizing the uncertainty around a law that hasn’t taken effect yet. He says he is a strong supporter of the Second Amendment.

“On the other hand, I’m a police chief in an era where mental health issues are at all time highs all across the country,” Jones explained. “I do believe there are people in our society who have no business having guns.”

Sheriff Steve Reams and Chief Mark Jones do have a lot in common in their views on mental health and guns, but they differ on strategies for enforcement.

“Things that happen in Greeley are pretty much left to the Greeley Police Department and then things outside of Greeley in unincorporated [Weld County] … is left to the sheriffs,” Jones explained.

As of 2017, Weld County had a population of 304,435, according to state data. Some 48,782 of those residents live in unincorporated parts of the county, entirely under the sheriff’s jurisdiction.

Exactly what that means isn’t yet clear, for the ability to request an ERPO or for being the subject of one.

Domestic violence shelters and suicide prevention organizations work with people who are affected by gun violence and who could be affected by this law. Some organizations didn’t want to respond directly to questions about possible impacts. One Greeley-based organization, A Woman’s Place, wrote in an email: “We are not a political agency and will not be making a political statement.”

Larry Pottorff, executive director of Greeley-based North Range Behavioral Health, said he isn’t sure if the law will help.

“I don’t want it to be harmful in how we interact with people,” Pottorff said. “So I would be very cautious about doing something that would hinder our therapeutic relationship with an individual.”

“We want to save lives,” Pottorff said. “So, whatever works. We’re certainly going to consider every tool that will be available to us.”

BreAnne Meyer, outreach director of Safe Shelter of St. Vrain Valley, said domestic violence organizations like hers are waiting to see how the new law is folded into existing procedures.

“It does seem like it could be problematic for our clients coming from the Weld County side,” Meyer said in an email. “We can add that to the list of unknowns in how the ERPOs will play out. We don’t know how widely used it will be. Everyone will be figuring out processes.”

In a statement, Mental Health Colorado, an advocacy organization that pushed for the law, says it remains committed to advocating for access to ERPOs.

“More than half of all suicides in Colorado involve a firearm,” the statement reads. “We believe everyone should have access to this life-saving protection order no matter where you live. Saving lives should not be a partisan issue.”

Gun Politics In A Purple State

In Colorado, as in the rest of the country, any legislation involving guns is absolutely partisan.

Colorado’s ERPO law, which Reams and others refer to as a red flag law, is part of a larger political clash in a state that is becoming more populated and politically mixed. That’s why some here call the new law a much needed life-saving measure, while others say it is an unconstitutional gun grab.

Originally appeared in Guns and America.