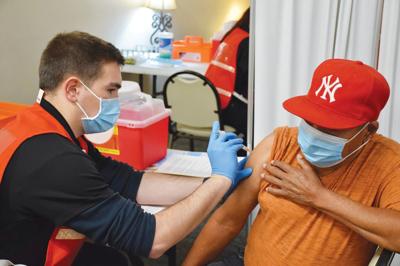 Before late 2019, most Coloradans associated the word “pandemic” with disaster movies and novels.

But on March 5, 2020, the reality of the pandemic hit home as Gov. Jared Polis announced the state’s first confirmed COVID-19 case. One day later, the first case in El Paso County was reported.

The virus has wrought economic havoc and unleashed turmoil both in the business world and personal lives — and some of its effects will continue to be felt long after the threshold of herd immunity is reached.

But it has also kindled positive changes, from medical advances to increased collaborative efforts that will linger after the pandemic fades.

Here’s a look at both sides of the equation as we pass the one-year mark.

At the start of the pandemic, “we knew nothing, really, about how this virus was going to work, about testing for that virus,” said Dr. Stephen Cobb, vice president-physician executive for quality, safety and clinical operations at Centura Health. “We had no idea how the tests were going to perform, what the actual spectrum of disease was, the infectivity, the mortality rate. All these things, we had to learn very quickly and adapt what we do.

“By necessity, health care is slow to adopt new things,” he said. “But boy, if we have to, we can be fast.”

A case in point is the development of the vaccines.

Although the technology used to develop the mRNA vaccines was relatively new, it had already been used to fight the Ebola virus.

While acting quickly to discover more about the virus, the health care community also learned to be nimble in adapting to new information, Dr. Cobb said, and in adopting more effective treatments and prevention procedures.

“Hospitals got better at the basics,” he said. “We treat respiratory distress syndrome commonly in hospitals, but not at the rate that we did at the height of the pandemic. The improvement in care was significant.”

The health care system adapted rapidly to ramp up telehealth resources, which, Cobb said, were underutilized before the pandemic.

While the use of telemedicine might retreat a bit after the pandemic, Dr. Cobb said, health insurers are developing reimbursement structures to ensure that the most effective ways of delivering telemedicine remain, and health systems are working toward fully optimizing virtual and remote visits.

Another unknown when the pandemic began was how effective masks were in preventing the transmission of respiratory disease, in protecting both wearers and others with whom they come in contact.

“Now we have really good data that it does both,” Dr. Cobb said. With mask wearing and other measures such as distancing and hand washing, “we showed as a community that we can almost totally shut down the spread of this virus.”

That raises an interesting question for the future, he said.

“In a really bad influenza season, we lose 80,000 Americans dying from influenza infections,” he said. “Are we willing to wear a mask through a bad flu season?

In Colorado, health care providers also learned that, although they are competitive businesses, they can collaborate effectively and be stronger.

“Since the pandemic started, we have had daily calls with the chief medical officers of competing health systems all over the state,”

“I’ve always valued partnerships and forming relationships,” Wheelan said, “because I know that for significant progress, how important those relationships are.”

Wheelan said connections with staff at the state level have expanded to daily interactions, and locally, groups including a vaccine distribution consortium and a health care policy group have been formed.

The vaccine consortium brought together health care providers and retail pharmacy chains in a new way. The policy group includes CEOs and medical directors of local hospitals and representatives of local and county government.

The department has greatly strengthened its data collection and distribution through the creation of a new office of data analytics, which developed the COVID-19 and vaccine data dashboards that are updated daily on the department’s website.

“I think that has been one of the highlights of our response,” Wheelan said. She hopes the data analytic practices the department has developed can be broadened in the future to include more key indicators to monitor the region’s quality of life.

“I want it to serve the entire county and all the towns and cities within with the indicators of how we are doing with workforce, jobs, poverty, food insecurity and education,” she said. “We are in discussions around that.”

Wheelan and Deputy Director DeAnn Ryberg hope that the pandemic has underscored the importance of Public Health to the community.

“It’s clear that the economic health and vitality of our community is inextricably linked with the public health of our community,” Ryberg said. “I think something that we will hear and see in the future is how the business community and Public Health can work together to strengthen our community.”

The county’s progress in reducing the incidence of the disease, as well as hospitalizations and deaths, is the result of the cumulative choices and actions by individuals and businesses, said Dr. Robin Johnson, El Paso County Public Health medical director.

“It is essential that we still have some vigilance,” Dr. Johnson said, and continue to practice the preventive measures that have proven to suppress transmission of the virus.

Mutations of the virus that appear to have made it more easily transmitted “emphasize the need for us to get vaccinated, because the more that the virus has the opportunity to spread and create severe illness, the more opportunity it has of evolving into something that is more virulent or potentially deadly,” she said.

Ryberg said the public health agency welcomes the opportunity to partner with businesses in promoting vaccinations.

“I think businesses can provide information to their employees and provide support to them regarding vaccination, making that time available to employees to get vaccinated, and to follow the eligibility phases as offered from the state so that they know when they are eligible,” Ryberg said.

One of the most important collaborations that has grown out of the pandemic is the Regional Recovery Council, an organization that brought together a wide range of business, nonprofit, government, education and other community partners.

The Chamber & EDC convened a group within a week of the first positive case in the county. It became a multidisciplinary team that spearheaded a coordinated resiliency and recovery effort.

“That was a network that didn’t exist before,” Draper said. “Sure, we all knew each other, but we weren’t in constant contact like we are now. And there have been a number of those ties that will endure after the pandemic.”

The pandemic also served as a reminder “of the importance of having a diversified economy,” Draper said. “The impacts of the pandemic in our region have been very uneven. We have some sectors that have continued to grow and prosper — aerospace and defense, construction and the tech software development industries. And others — the entertainment, food service and hospitality venues — have really suffered.

“If we didn’t have the strong sectors, our recovery and resiliency would be much worse,” he said.

Draper said he has seen stellar examples of nimbleness and innovation by individual businesses, including carry-out drinks, curbside delivery, call-ahead orders and QR codes that can reduce the cost of printing menus.

“That’s a combination of industry and policy makers who are willing to accept those changes,” he said.

“Employers should consider not thinking of returning to an old normal.”

“I think we’ll see some long-term changes in structure and practices that have been adopted during the pandemic,” Draper said. “I look out my window and see the parklets on Tejon Street that allowed restaurants to continue doing outdoor dining, and the willingness of customers to bundle up and eat dinner with gloves on. … And so how we respond as a community to our local businesses will determine what those are what our business community looks like in the future.”

One of the remaining questions as the nation emerges from the depths of the pandemic is what the long-range effects on mental health will be.

Over the course of the pandemic, “we’ve seen really dramatic spikes in positive screenings for anxiety and depression. We’ve seen increases in substance abuse with alcohol and drugs. We’ve seen lots of reports suggesting that there have been upticks in overdose-related incidents,” said Vincent Atchity, president and CEO of Mental Health Colorado. “I don’t know yet if we have data to support it, but there has been a whole lot of expert speculation that we’ve got very elevated risks for suicide in all age groups.”

Among the concerns about school-age children is that remote settings remove them from contact with school-based mental health specialists and counselors. Signs of issues like learning difficulties, food insecurity, family financial instability and abuse have been much harder to see.

All of these problems could collide when students with different experiences come back to school, Atchity said.

“There may be some kids who have thrived in a remote setting,” he said, “and there will be the kids who have learned nothing and were completely flailing. When those two populations are stuck back together, it’s just very unpredictable what the dynamic of that is going to be.”

Some of those same dynamics may also play out in the workplace, he said. Some people may find it more stressful to resume commuting.

“I think of people returning to work who are resentful of an employer context that suddenly thinks it’s important for them to spend two hours or more to get to a place where they’re doing the same work that they were doing from home,” he said. “And then, other people will be thrilled to finally be back at the office. You’ll have that weird mix; that is an unpredictable dynamic.”

“Employers should consider not thinking of returning to an old normal,” Atchity said. Instead, they might permit more flexibility for people with regard to remote work, if the nature of the work allows.

“The other thing that employers ought to do is make mental health and wellbeing a part of the business culture by making it a commonplace point of conversation,” he said.

It’s also important for employers to look differently at benefits.

They can, for example, select health insurance programs that offer good access to mental health care, and they can shift the concept of sick time to embrace wellness time, Atchity said.

“Business leaders can do a whole lot to change the culture by acknowledging their own human state,” he said, for example, by starting a meeting by saying, “I’m having a hard time focusing today.”

“By humanizing at the leadership level, it encourages people to feel seen and understood as humans whose functionality is going to vary from day to day,” he said. “Those employers that stick to that old façade of unassailable professionalism at all times, that’s going to be uncomfortable for people who are in distress, and they will have a harder time retaining their people.”